The Riddle of the Purple Emperor 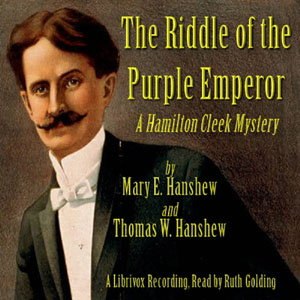 The Riddle of the Purple Emperor

LibriVox recording of The Riddle of the Purple Emperor, by Mary E. Hanshew and Thomas W. Hanshew. Read by Ruth Golding.

Orphan Lady Margaret Cheyne returns home on her eighteenth birthday to live with her embittered maiden aunt and to take up her inheritance of the family jewels. The Cheyne jewels include a pendant featuring the Purple Emperor, a priceless jewel looted from a temple during the Indian Mutiny.

During her time at school in Paris, Lady Margaret has met and fallen in love with Sir Edgar Brenton, the son of an old flame of her aunt and a neighbour in the village of Hampton, where Cleek's adored Ailsa Lorne has also taken up residence.

Lady Margaret's return leads to a mysterious and sinister chain of events, which Cleek and Superintendent Maverick Narkom of Scotland Yard attempt to unravel, with, of course, the help of the irrepressible and ever-hungry Dollops, Cleek's cockney sidekick.

This full-length mystery is a welcome return for Hamilton Cleek, whom we first met in Cleek: The Man of the Forty Faces. (Summary by Ruth Golding)

Reviewer: Timothy Ferguson - - October 7, 2011
Subject: Look, it could just be me...
...but the ending of this makes no sense at all, now does it? Is it that I'm an Australian? I don't think it is. I think the ending is clver in the sense you'll never guess it, but a problem in the sense that no normal criminal would consider it because in the real world it just would never work.

The reader is marvellous, and the rest of the series is fun, but this one's plot...well...I think it has problems.

Reviewer: picfixer - favorite - October 1, 2011
Subject: Absurd and at times offensive
By their very nature whodunit plots must to a certain extent be contrived, but there are limits which "Purple Emperor" exceeds time and again. However the main objections are to situations which are so unbelievable, so utterly impossible, they become laughable. Topping things off the "n" word is repeatedly used in its most derogatory sense when referring to East Indian characters. Even making fair allowance for the standards of time in which it was written, the use of racial epithets is both excessive and objectionable. Too bad. An excellent reading has been wasted on a less than worthy book.

Reviewer: aimzzz - favoritefavoritefavoritefavoritefavorite - November 2, 2010
Subject: great reading
Ruth Golding is in fine form with this one... I continually had the feeling of sitting around a campfire with somebody telling a scary story (The story isn't scary-- I'm talking about the atmosphere Golding creates). The story is a fun mystery.
I rated 5 stars for the reading... I'd give the story a 4.

What the woman and the police don't realize is that the witness of this odd circumstance is none other than the famous Cleek of Scotland Yard, who knows something is wrong and will not back down until all of his questions are answered.

This is a great story, and the reader does a fabulous job. Enjoy!